Liliha, HI (August 06, 2022) – A 28-year-old man was arrested after injuring a police officer while attempting to flee the scene after being suspected of driving under the influence.

At about 3:00 p.m. on Friday, August 5th, an officer responded to reports of a stalled vehicle on Vineyard Boulevard in the area of Pua Lane in Liliha.

Upon their arrival, officers discovered a man asleep at the wheel and commenced a DUI investigation.

The suspect originally consented to a field sobriety test, but eventually changed his mind and re-entered his vehicle. Officers attempted to remove the man from the vehicle, but he drove away from the scene, injuries an officer as he did so.

The man then ditched the car and continued on foot but was soon apprehended by officers.

The area was shut down for more than three hours as the incident was investigated.

The officer sustained injuries believed to be non-critical.

The suspect was arrested on suspicion of resisting arrest, assault on a law enforcement officer, driving with a license that’s been suspended or revoked for DUI, and driving under the influence.

Our thoughts are with the injured victim and their family at this time. We hope for their full recovery. 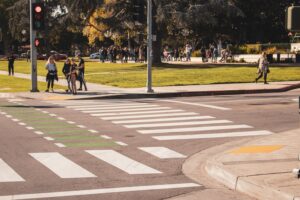 If you were injured in a pedestrian accident caused by another person’s negligence, it is important that you reach out to a reputable Hawaii personal injury lawyer who understands what you and your family are going through. Having an experienced and aggressive advocator on your side will ensure you receive the full financial compensation for your injuries.

Some examples of driver behaviors that cause pedestrian accidents include:

Although pedestrian accidents happen for various reasons, an overwhelming majority of them are caused by irresponsible drivers.

These negligent driver behaviors put countless people in danger, especially cyclists, and pedestrians. When the person in control of a potentially deadly vehicle is careless or inattentive for even a split second, the chances of them taking a life or leaving a victim seriously injured are extremely high.

At Leavitt, Yamane & Soldner, we are focused on the full recovery of our clients in the fastest and most comfortable way possible. If you were injured in an accident due to a negligent driver, contact our personal injury attorneys in Hawaii today by calling (808) 537-2525. Schedule a free and confidential assessment of your potential case to find out what legal options are available to you.

If you need an accident lawyer in Hawaii, let us help. It starts with a phone call or an email. There is no cost. We are paid only if we recover money for you. Fill out the form or call us at